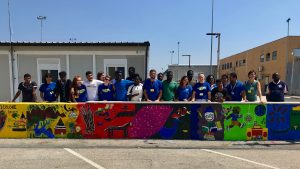 Brindisi, Italy – The Ostro summer winds are blowing strong and hot across the Mediterranean sea from the continental south, but the flow of unseaworthy vessels departing from the north African coast carrying the desperate and brave has slowed to a trickle. It is not the heat in the air discouraging the ships from attempting the journey, rather, it is the fiery political climate of Italy and Europe. A recent spike in nationalistic and anti-immigrant sentiment in public discourse has led to the election of populist figureheads like Matteo Salvini: Italy’s new minister of the interior. After the Aquarius incident ‘Chiudiamo i porti’ (close the doors/ports) has become a common rallying cry of Salvini’s and the Italian right, who have run a successful campaign to gin up fear and blame ‘the migrants’ for the country’s economic sluggishness and struggle over national identity in the age of globalization.

The ‘Centro Accoglienza per Richiedenti Asilo’ (Welcome Center for Asylum Seekers) in Restinco, a small village outside of Brindisi in the southern region of Puglia, is one of the many first points of shelter for migrants. After disembarking from NGO and National Coast Guard ships, like Aquarius, migrants of the C.A.R.A of Restinco are housed in abandoned military barracks and tents. This summer the number of guests in the center is down from over three-hundred one year prior, to just under one-hundred-and-fifty, its recommended capacity – still, a 50% decline. A few of the migrants and asylum seekers who remain in the center participate in the art and language workshops run by the Spring Hill College Italy Center Summer Migration fellows. One of the activities of the workshop is an art therapy session where guests of the center have an opportunity to visually depict Items from their homeland, parts of their journey, or aspirations for the future.

The slight gleam in the guests’ eyes when they are recounting facts about their families, food, and traditions vanishes when they begin to speak about their journey through war-torn Libya: the final destination before Italy. Stories of entire busses of migrants being pulled over and summarily executed by Libyan warlords are not uncommon to hear in the center. Neither are the personal accounts of extortion, unlawful imprisonment, torture and slavery. “There is no going backward when you are in Libya” one of the participants of the workshops recently recounted, “Either you cross the sea, or you die. I woke up every morning in Libya fearing death.” According to numerous sources in the center familiar with the situation in Libya there are over 50,000 migrants currently trapped in similar conditions, waiting for smugglers to devise new routes to enter Europe.

As publicly convincing as Salvini’s nationalistic rhetoric about the effectiveness of enforcing hard boarders may be, speaking with migrants in the centers presents a totally different reality. Despite the current dip in flows, Europe is only seeing the beginning.

Discussions with guests at the asylum center reveal a number of factors for migration that have existential roots in the way the west has shaped the world over the past several decades. The linguistic and cultural remnants of colonialism and the failure of European nations to help rebuild what they once destroyed. A failure of the neoliberal order to address global economic inequality, blinded by its hunger for economic growth. Widespread use of communication technology which can give a false ideas and images of realities in ‘rich’ countries. And lastly, the adverse effects of climate change on natural resources in equatorial zones leading to economic and political instability. These are all intrinsic causes of migration that need to be addressed, but that will not abate in the near future.

Speaking with guests at the center also reveals another reality: the cultural wealth and economic opportunities of migration can benefit Europe with proper investment in integration. The European project was founded on the value of cultural diversity. The foods, cultural traditions, and diversity of ideas in the C.A.R.A, if appreciated, can enrich and enhance Europe’s already culturally vibrant spaces. This is a phenomena that, while ignored by populist zeitgeist, has already been happening for thousands of years. The boost to the economy of young able-bodied men of the C.A.R.A who have a burning desire to work, pay taxes, and buy into the economic system can blunt some of the adverse effects of Europe’s transition to a service sector economy.

Recent actions by European leaders demonstrates that they are failing to see these realities of migration into the bloc. It cannot be stopped, and should not be stopped. The only option is for Europeans is to accept and embrace the presence of migrants and to work to integrate them into the social and economic fabric of Europe.

Derek Lewis is the coordinator of the Spring Hill College Italy Center Summer Migration Fellowship. This is an internship for rising seniors and recent graduates who spend six weeks in Brindisi, Italy working at the Caritas Soup Kitchen and the Centro Accoglienza per Richiedenti Asilo. Learn more about the fellowship here.