Partner Perspectives from the field (Puglia); the migrant crisis 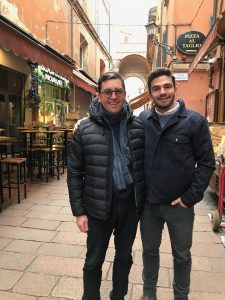 Partner Perspectives from the field (Puglia); the migrant crisis

Derek Lewis (Santa Clara University ’17) has been working as a Program Coordinator for the SHC Italy Center since the Fall of 2017.  This past summer Derek oversaw the daily operations of the Italy Center’s Migration Fellowship Program that places interns on the front lines of the European migrant crisis.  Don Piero is the Director of Caritas based in Brindisi and is considered one of our key partners in the field.    https://www.italycentermigration.com

Can you introduce yourself and talk about your collaboration with the SHC Italy Center?

My name is Don Piero Demita, I am a parish priest in Brindisi, Italy as well as the director of the Caritas (i.e. Catholic Charities). I first met the staff and students of the Spring Hill College Italy Center 6 years ago when I became the director of the Caritas. The American students came to Brindisi for a short trip and participated in a day of service in the soup kitchen at the Caritas. As the years have gone by the collaboration has developed into more of a close relationship, one might say friendship, between the staff of the Italy Center and the groups of students who come to Brindisi. Over the past two summers we have had the opportunity to develop and even deeper collaboration where a few American students spend 6 weeks in Brindisi and immerse themselves into the realities of Puglia while they work at the epicenter migration in Italy.

What do you hope these American students take away with them from their experiences in Brindisi?

Don Piero: The city of Brindisi has “accoglienza” (the act of welcoming foreigners) in its blood. In 1992 our City with a population of 80,000 people received 20,000 Albanian refugees fleeing poverty. We have been welcoming refugees ever since. Here in Brindisi hospitality is a way of life, it is something that we do not question. At the Caritas, we are not offering a service for the poor, we are sharing a meal together in solidarity.

The political climate, with regards to migrants and refugees, is changing in Italy. Salvini [Italy’s minister of the interior] is attempting to close the border to those fleeing poverty and suffering. Can you talk about how this has affected the migration situation in Brindisi?

Don Piero: In Brindisi we must remember who we are and our values. We must attempt to fight the fear of the other and attempt to be welcoming to those who come into our land seeking refuge or a better life. It is worth mentioning that Pope Francis’ first trip as Pope was to the island of Lampedusa [an Italian island off of the coast of Sicily and a hotspot for migration into Europe]. This means something, we have a duty to honor the human rights of everyone, not just our own people.