The SHC Italy Center provided an optional tour to Israel & Palestine during the recent Thanksgiving break.  The first half of the tour students met with Israeli associations and activists who are working on a range of projects aimed at peacekeeping and a two-state solution.  The second half of the tour included meetings in Palestine organized by the Italian NGO Operation Dove.

Below is one student’s perspective on the time spent in Israel and Palestine.  Anna Wright is a Junior at Regis University in Denver and is majoring in both English and Peace & Justice Studies.

Issa, our guide for the day, spoke these words as an Israeli settler walked by, not but five feet away. The settler held the hand of his small child while simultaneously carrying an assault rifle.

Issa guided our group through what is referred to as the H2 sector of the city of Hebron. The H2 corridor is perhaps one of the most tense situations I’ve been in. Once a thriving and bustling market epicenter, the old city is now caged in by checkpoints. On one street, people were herded through turnstiles guarded by Israeli military in order to reach their mosque.

At a checkpoint, Issa was asked to show identification. He was subsequently searched,  invasively, for weapons. We walked by without question.

This level of armament, restriction of movement, and conflict is just a short glimpse into daily life under occupation. In an unprecedented opportunity, I spent this past Thanksgiving break traveling to Israel and the Occupied Palestinian Territories alongside six of my peers. In just five short days, we came to better understand the struggles the Palestinian people face, as well as the multitude of movements standing against occupation. Through meetings with Palestinian activists, I witnessed the most salient examples of resiliency and nonviolent resistance.

The Israeli-Palestinian conflict is perhaps one of the most complex and definitely not easily understood in such a short trip. The conflict has deep roots in religious contention, the politics of land, and a history of oppression for both peoples. Both Israeli and Palestinian people lay cultural and territorial claim to the space. Centuries of oppression and violence have fueled the current situation of this conflict.

The establishment of an Israeli State in 1948 led to the mass displacement of Palestinians from their land. The Six Day War in 1967 led to the occupation of both the West Bank and Gaza, placing millions of Palestinians in those areas under Israeli military control. The remaining territories were divided into three different sectors. Area A is comprised of cities, completely under the administration of the Palestinian Authority. The entrances to these areas are controlled by Israeli military and the checkpoints are often arbitrarily closed and monitored. Area B is under joint control, and Area C is under full Israeli authority. Area C comprises approximately three-fourths of the Palestinian territories. Israeli settlements and outposts are steadily being built within these areas. For Palestinians, this means more displacement, violence, and the demolition of homes and communities.

Our trip led us to the West Bank, in which we visited the city of Hebron, the village of AtTuwani, and the village of Umm al Khair. Each of these places is experiencing Israeli occupation in markedly different ways.  Hebron is in Area A, but an Israeli settlement in the center of the city has shut down markets, pushed people from their homes, and increased the level of violence. AtTuwani and Umm al Khair are both villages in Area C facing the effects of encroaching settlements as well. 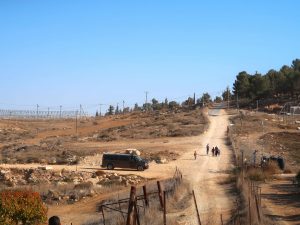 In AtTuwani, an Italian NGO, Operazione Colomba, has maintained a presence in the village for 14 years in order to document human rights abuses, serve as an international interposition, and simply share life with the people there. In our afternoon spent in the village, we watched as children that came to the village for school that day had to be escorted home by an army vehicle and members of the NGO. The road that the kids walk passes dangerously close to an Israeli settlement and they have been attacked physically numerous times by the settlers. Shepherds tending to their herds on their land are often attacked and even shot from a distance. Operazione Colomba maintains a presence with the shepherds daily.

Perhaps the most powerful visit of our trip was to the Sumud Freedom Camp. Against the beautiful landscape of South Hebron Hills, a Palestinian flag was proudly flown. It marked  a demolished village that youth activists decided to reinhabit. Largely the same age as those of us on the trip, they were of a generation of Palestinian youth that have grown up under occupation. In an effort to help protect their land and their history, they made the decision to rebuild caves historically inhabited by Palestinians in order to maintain a presence in the village and stop further settlement growth. Also students at university studying English literature and law, they had endured violence and abuse in order to remain in the village. Aged 20 or 21, these students have been forced to live with strength I can’t imagine. 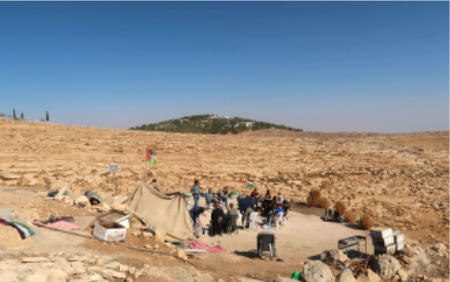 Returning from this trip has been incredibly emotional and difficult. Reading about a conflict such as this one is vastly different from witnessing the toll that it has taken on places, lives, and communities. There is no amount of academic journals or news articles that could have prepared me for what I witnessed in Palestine. But at the end of the day, I am able to return home. I left the state of Israel with ease and my American passport grants me immunity in most situations. Because of a myriad of privileges, I am able to freely traverse borders such as the wall that runs 440 miles between Israel and Palestine.

As students of Jesuit universities, we are pushed everyday to confront these privileges and with the enormous task of learning how to become better global citizens. My classes as a Peace and Justice student, while poignant and important, are often paralyzing. I feel both immobilized and minuscule in the face of overwhelming injustices in the world.

A trip such as this one, while displaying deep injustices, also strikes inspiration for resistance. While it’s true that all injustice in this world is interconnected, so are the solutions. Standing Rock activists have regularly communicated with the Palestinian movement, with a delegation of Palestinian youth traveling to North Dakota in solidarity with the indigenous movement. Palestinian activists shared strategies for dealing with tear gas attacks by military and police forces with Black Lives Matter activists in Ferguson. All justice work is intertwined. We must show solidarity with movements both abroad and in our local communities.

Life in the Occupied Territories is anything but easy, and I don’t mean to romanticize the struggle and resistance of the Palestinians. However, I truly think that I have something incredibly valuable to learn from the strength and resiliency I witnessed in the people that I met.

The Sumud Freedom Camp is named after the Arabic word and Palestinian concept of sumud, roughly translating to steadfast perseverance. Effective nonviolent resistance is sumud; it is a devotion to justice, to solidarity, and to hope. I think that we have worlds to learn from both the Palestinian people and the concept of sumud. I will not soon forget what I learned in the short time spent in Palestine. I hope to apply these concepts of nonviolent resistance to other situations of injustice, as well as continue to stand in solidarity with Palestine from abroad.