The Italy Center provides logistical coordination and academic oversight to mature students who are willing to integrate and apply skills in a research project (on some campuses referred to as a “capstone project”).   Students are assigned to a faculty and in many cases to a community leader who will assist the student in guiding the project.

The Italy Center seeks to support student research initiatives that focus on issues of social justice, religious traditions, migration and global issues from a human rights perspective. The student, with the encouragement of an assigned Italy Center faculty advisor, will be asked to engage in the local community and are asked to use their Italian language skills (regardless of one’s level of proficiency).

Research that could potentially be conducted within the confines of a United States library will not be accepted.

At the end of the semester, students will submit a 7,000 words research paper. 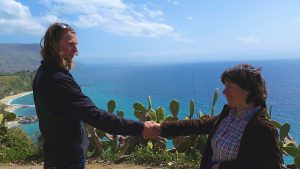 Carson traveled to the Calabria region to conduct research for his independent study about ethical purchasing groups and immigration. “My study involves immigration, human rights, environmental sustainability, and the economics of an emerging market for the critical consumer. Besides my research work in Bologna, I spent four nights in Nicotera, home of about 500, studying the cooperative SOS Rosarno. Rosarno is a town fifteen minutes downhill from Nicotera and plays a major role in organic agriculture and immigration. It was fantastic to experience how individuals are making a difference in dignifying workers and protecting the environment through ethical purchasing and producing.”

“Carson’s work was so important for us. His interest, curiosity and competence led us us to review our work and produce new documentation and knowledge that we had only experienced in a very practical way over the last years of activity. From unloading orange boxes at a freezing cold fruit market in Bologna, to conducting on-site research with an Italian academic in Rosarno, Carson truly brought together different realities throughout Italy in a very positive synergy”. Caterina Alvisi, Carson’s supervisor. 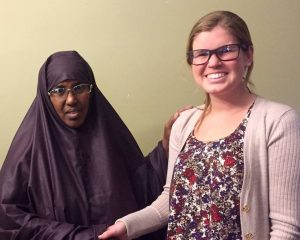 During her semester in Bologna, Anna Grace researched discrimination among Muslim immigrants in Italy. “While in Italy, I spoke extensively to social workers combating homelessness; I traveled to Rome to meet with the Vice President of the Islamic Religious Community in Italy, I interviewed the Imam of the Mosque in Bologna, and the director of the Intercultural Studies Center in Siracusa, Sicily. I realized that, while the economic crisis is one of the reasons for the increase in homelessness, xenophobic reactions to migrants and refugees are also part of the problem. Because of the growing number of Muslims, it is becoming even more important to combat the fear and hatred towards them.”

“My desire is to become an ordained Presbyterian minister with an emphasis on interfaith. My time in Bologna has changed my life in so many ways.  When I returned back to Rhodes, I took Islam-based classes and I changed my Bonner service site to working with World Relief. Now I am attending Columbia Theological Seminary”.

Students interested in undertaking an independent undergraduate research project while abroad must contact the program coordinator at least 3 months prior to their arrival in Italy. A 2/3 pages statement of intentions must be submitted 2 months before arriving in Bologna.