Social Justice Tour: Reconciliation through the lens of a Bosnian Muslim

The photo below is the hand of a survivor of the Srebrenica Massacre of July 1995. Reconciliation organizations are, to this day, using blood samples of survivors to match DNA to the remains of victims. Bones of victims found in mass graves are then returned to survivors providing a sense of closure. 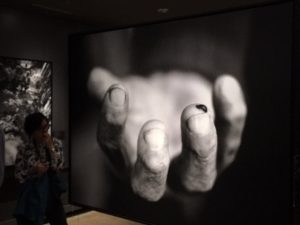 Fr. Arturo Sosa S.J., the superior general of the Society of Jesus argues that a Jesuit education should promote opportunities for inter religious dialogue and enable students to engage in peace and reconciliation efforts. Immersion trips push our students to take a critical lens to the sins of the past and then prompt more sophisticated thinking about forms of colonization, slavery, war, and violence that exist today among religious and ethnic groups.

The Bosnia Social Justice Tour offers a unique experience for Italy Center students to come face-to-face with survivors of war.  During the six-day tour we meet with Muslim religious leaders in the divided City of Mostar, hear from local citizens as to the future of Bosnia, and spend a morning with the Mothers of Srebrenica.  In July of 1995, 8300+ Bosnian Muslim men and boys were executed in mass graves near the town of Srebrenica, while the United Nations Dutch battalion stood silent.

Munira Subasic lost 22 members of her family in the massacre. She recently met with our Italy Center students to talk about her work in recovering the missing, (i.e. bones exhumed from mass graves) and her Association’s efforts to keep the pressure on prosecuting war criminals at the Hague Tribunal.  The following captures her message:

“ The best gift in life is not to hate.  We must live without hatred and rage. If our political leaders are speaking of xenophobia and Islamophobia it is the role of all of us to speak out against such divisions.  I am genuinely committed to speaking of love, there is no hatred in me.” 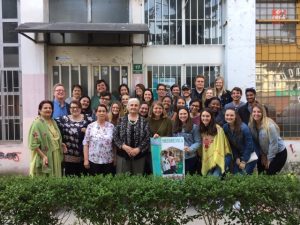 Andrea Solis-Canto , a Political Science major from Xavier University and a native of Boise Idaho was troubled by the fact that the Bosnian wars are not taught in American high schools.  “I had friends in Idaho who are Bosnian and I never knew about the war. It is clear that if we do not understand why this occurred, history will likely repeat itself. Andrea went on to say:

“I am inspired by the Women of Srebrenica who never intended to run a non-profit but are full of so much empathy.  They are effective on the local level all the way up to their meetings with Bill Clinton who came a few years ago to a funeral procession.  These are really inspirational women. Dr. Nardini’s Terrorism, Revolution and War class gave me the academic foundation for my visit to Bosnia but these women give me the inspiration to work for change.”

Jori Brewer, an Occupational Therapy major from Saint Louis University adds; “it was beautiful to be in a space where these women talked about forgiveness, I am honored to have been able to hear their stories.  As I reflect on the small challenges I face in my own life, I cannot fathom that Munira is able to forgive after such horrific bloodshed. This is really a beautiful thing.”

As a Jesuit institution we are aware of the sense of urgency and the need to better walk our Jesuit justice talk, so to speak.  Fr. Sosa’s vision for Jesuit higher education summarizes and underscores the goal of the Italy Center’s Bosnia Tour; “ to walk with the poor, the outcasts of the world, those whose dignity has been violated, in a mission of reconciliation and justice.”